This National Monument on the site of the first flying school in South Africa, comprises a memorial, a reconstructed hangar and a replica of the Compton Paterson biplane used in flight training. It commemorates the role played by early aviators in establishing the South African Air Force.

Aviation in Kimberley dates back to 6 June 1911, when John Weston made the first flight in the city, establishing a South African non-stop flight record of 8½ minutes in his Weston-Farman biplane, the first South African built aeroplane. Cecil Compton Paterson, Captain Guy Livingstone and E F (Bok) Driver arrived in Cape Town in December 1911 for a series of demonstration flights.

These demonstrations, including one in Kimberley and the first airmail flight, brought aviation to public notice. Compton Paterson established his own flying school, the first in South Africa, at Alexandersfontein in July 1913.He negotiated with the Union government to train military pilots at his flying school and on 10 September General Jan Christian Smuts signed a Memorandum of Agreement with Paterson whereby ten pupils were to be trained as pilots. The training was comprehensive and tough. Five of these men eventually became the first pilots of the newly formed South African Aviation Corps, which went into action on 6 May 1915, when Kenneth van der Spuy flew a reconnaissance sortie at Walvis Bay.

Private students also attended the flying school, one of the most famous being Marie Bocciarelli, who was the first woman in South Africa to train as a pilot. The flying school at Alexandersfontein was abandoned in 1914 due to the outbreak of World War 1 and Paterson’s return to England. 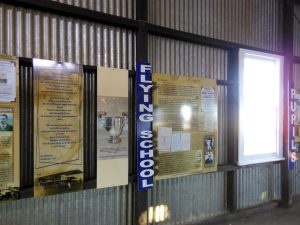 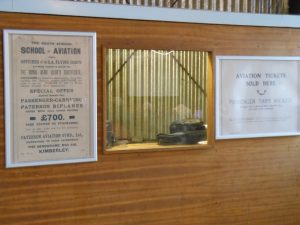 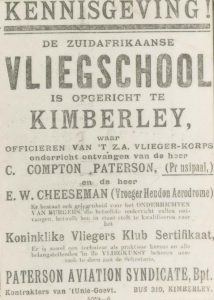 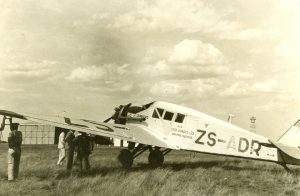 Only by appointment with guide from the McGregor Museum. Small groups only
Off the N8 towards airport, turn left pass the army camps (4km)